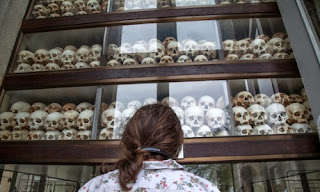 "A UN-backed war crimes tribunal has found the Khmer Rouge’s Brother No 2 Nuon Chea and former head of state Khieu Samphan guilty of crimes against humanity and sentenced the two elderly men to life imprisonment, in a move heralded by human rights groups as a “historic victory” for the nation. The verdict comes nearly 40 years after the regime led by Pol Pot ended its murderous four-year reign over Cambodia, during which time nearly 2 million people – a quarter of the population – died from starvation, exhaustion, execution or lack of medical care as a result of the communist “utopia” experiment. Khieu Samphan, 83, known as “Mr Clean” for his reported incorruptibility, and Nuon Chea, 88, the Khmer Rouge’s chief ideologue, were both charged with crimes against humanity, homicide, torture, genocide and religious persecution, all committed during a regime that forced Cambodia into “a state of terror”, according to the tribunal’s chief judge Nil Nonn." The tribunal is the so-called "Extraordinary Chambers in the Courts of Cambodia" (ECCC) which represents a hybrid model of International Criminal Justice. Instead of an international criminal tribunal it's a cambodian court that receives international assistance from the United Nations Assistance to the Khmer Rouge Trials (UNAKRT). "In 1997, the government requested the United Nations (UN) to assist in establishing a trial to prosecute the senior leaders of the Khmer Rouge. In 2001, the Cambodian National Assembly passed a law to create a court to try serious crimes committed during the Khmer Rouge regime 1975-1979. This court is called the Extraordinary Chambers in the Courts of Cambodia for the Prosecution of Crimes Committed during the Period of Democratic Kampuchea (Extraordinary Chambers or ECCC). The government of Cambodia insisted that, for the sake of the Cambodian people, the trial must be held in Cambodia using Cambodian staff and judges together with foreign personnel. Cambodia invited international participation due to the weakness of the Cambodian legal system and the international nature of the crimes, and to help in meeting international standards of justice. An agreement with the UN was ultimately reached in June 2003 detailing how the international community will assist and participate in the Extraordinary Chambers. This special new court was created by the government and the UN but it will be independent of them. It is a Cambodian court with international participation that will apply international standards." http://www.eccc.gov.kh/en/about-eccc/introduction 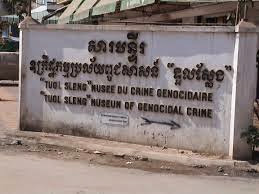 Why was this model chosen? the website from ECCC tells us that "the hybrid tribunal model is seen as a way to provide full national involvement in the trials while at the same time ensuring that international standards are met. Unlike tribunals for Rwanda or the former Yugoslavia, these trials are not removed from the place where the crimes occurred. They are held in Cambodia, conducted mainly in Khmer, open to participation by Cambodian people and reported via local television, radio and newspapers" "The tribunal, launched in 2006 and once heralded as a great opportunity for Cambodia to confront its bloody past, has been bogged down by allegations of corruption and incompetence, spending up to the present day some $200m to convict only one defendant: the Khmer Rouge prison director Kaing Guek Eav, sentenced to life imprisonment in 2011. Illness and death have prevented other defendants from standing trial. Nuon Chea and Khieu Samphan, who both face an upcoming genocide trial, originally shared the dock with Khmer Rouge foreign minister Ieng Sary, who died in March, and his wife Ieng Thirith, the social affairs minister, who has dementia and was declared unfit for trial in 2012. The group’s top leader, Pol Pot, died in 1998. Despite the problems that have plagued the court, Lars Olsen, the court’s spokesman, called the verdict “a historic day” for both the people and legal system of Cambodia. “The victims have waited 35 years for legal accountability, and now that the tribunal has rendered a judgment, it is a clear milestone.” http://www.theguardian.com/world/2014/aug/07/khmer-rouge-leaders-guilty-of-crimes-against-humanity-and-jailed-for-life Here a link to a video about the ECCC: https://www.youtube.com/watch?v=b99IkHqt6aQ ECCC website: http://www.eccc.gov.kh/en UNAKRT website: http://www.unakrt-online.org/ You can find more information in this article: Michelle CASWELL. ¨Khmer Rouge archives: accountability, truth and memory in Cambodia¨. Archival science, Vol. 10, No. 1 (2010)
Posted by Gustavo at 3:25 AM