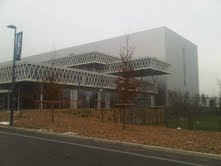 CECOJI (Centre of Studies for the International Juridical Cooperation) was founded in 1995 and associates the University of Poitiers and the CRNS (National Center for Scientific Research) the main public research institution in France. CECOJI specializes in several fields, including human rights and international law. Therefore, the colloquium paid special attention to the confluence of human rights and international law in a controversial field such as the one presented by the archives of dictatorships and authoritarian governments (such as Vichy France). SIAF replaces since 2009 the Direction of French Archives as directing body of the French Public Archives. SIAF belongs to the French Ministry of Culture. I will try to cover the main issues treated at this interesting Colloquium in a series of posts, to avoid lengthy narratives
Posted by Gustavo at 8:30 PM